…that our much loved founding director of KIMI Australia, Anja Mendez, had to retire from ministry. But much has happened since then. We had such a wonderful reunion in January 2015 when we were able to honor Anja and bless and release her into the new season of life God is leading her into. (Read more about it here.)

Anja will forever be a part of our hearts and affection. We will always honor her as the founder of a great vision in her home nation. Here were Anja’s parting words to us in winter of 2013.

It is not without sadness that I make the following announcement: For medical reasons and at the request of my GP, I have stepped down from my position as the Director of KIMI Australia.

KIMI Australia is currently in her 6th year and it has been both a pleasure and an honour to serve you during those years. I will miss you all greatly! As a pioneering work in Australia, I believe that we have been able to lay a good foundation on which others can continue to build. It has been so encouraging, especially over the last few months to encounter such an increase in interest in our materials and vision, and people’s excitement when they find out that KIMI is here in Australia.

Transition usually means that changes are unavoidable. In this case all future KIMI Australia events including “Firestarters Conference 2014” are cancelled.

Australian and New Zealand students of the “School of Supernatural Children’s Ministry” will be contacted soon with details regarding their Assignments and Graduation.

The good news is that Kids in Ministry will continue, both in Australia and New Zealand. It will be under the direction of Founder/Director of Kids in Ministry International; Becky Fischer.

I want to thank you all so much for your support. I especially thank Becky Fischer for being so amazing, gracious and understanding. I will miss being part of this special team of people whose hearts are so knit together in vision and purpose.

Signing off for the last time…

In His Love
Anja Mendez 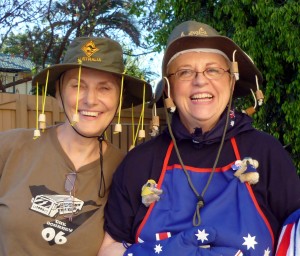 Anja served in children’s ministry for over 25 years; eight of those as the children’s pastor of Dunamis Christian Center in Brisbane, and the subsequent five years as the director of KIMI Australia. Anja was an anointed children’s minister, but also greatly inspired adults to

Anja is a certified graduate of KIMI’s School of Supernatural Children’s Ministry. As director, Anja trained over 66 PowerClub leaders and inspired many to take kids into the deeper things of God. She will be deeply missed by all of us at Kids in Ministry International.