Years before Adriana Morales became the KIMI Australia director, she was faithfully working behind the scenes using KIMI curriculums with the preschoolers in her church. She was seeing and proving for herself that small children had the propensity to enter into the deep things of God when taught simply in age appropriate ways. Adriana shared:

“The main thing that stood out to me when I began teaching the preschoolers was God moving first in my own son, Gabriel. He was only four at the time. I must admit, I did have a mindset about the ability of preschoolers to truly understand the deep things of God. I guess God had to show me through Gabriel that this age group can have real encounters with Him.

The first time God touched Gabriel was during a worship service in the main church. He began crying and my immediate response was to ask him if he was ok and did anything hurt him? All he said was that he didn’t know why he was crying, but he couldn’t stop. I did not discern at the time that God was moving.

Crying in the Presence

The following week we went to the Spanish church where I ran kids’ church. When we walked in, the music team was practicing their worship songs and straight away Gabriel began to cry again. This time I realized he was being touched by God’s presence.

In prayer I asked God if this is what was happening for sure, and He said yes. He told me to tell Gabriel next time he felt like this to simply lift up his hands and worship God. It was so beautiful to watch and Gabriel developed a real heart to worship. He was always listening to worship music at home and singing and always raising those little hands. 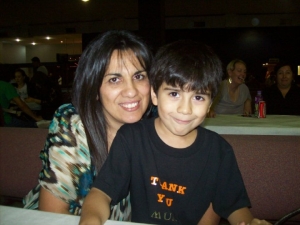 Sensitive to the Spirit

He began to sit all of his teddies on the lounge and pretend to preach to them. He would set up a little pulpit and even have a glass of water beside him.

During this time he became very sensitive to the Holy Spirit. He heard God’s voice audibly. He said God called out his name three times, so I shared the story of Samuel with him.

He would have dreams of people burning in fire and one that was so simple yet so profound for his age when he woke up with these words “God’s PRESENCE is better than Christmas PRESENTS.”

Tongues and Words of Knowledge

He sometimes would have words of knowledge and still does so to this day.

He would blurt out random things in the car like, “Mummy, do you know the Holy Spirit lives inside you? Your body is His house.”

He received baptism of the Spirit and spoke in tongues at a young age.

All these things happened in preparation for what God was going to do in the other children. But I guess he had to shift my thinking first and show me preschoolers can move supernaturally.

I then began to see God move in our preschoolers at church. Mums would come to me concerned that their kids were crying for no apparent reason during the week. They would share visions their child told them about. One was from a 5 year old who drew a picture of the family around the hospital bed praying for her sick grandma to get healed. The family did just that, and the grandma got better.

The worship was incredible and these little ones went deep. Their little hands would be lifted high and then they would share what God had said to them. They thoroughly enjoyed the God centres (which are a part of the KIMI Preschoolers in His Presence curriculum). After 13 weeks of each centre they truly understood what we were teaching. Parents were amazed at the things that would come out of their mouths! They retained the information. I believe our props (suggested in the curriculum) had a lot to do with it.

This age group is sensitive and easy to teach because they simply believe. If you make it fun you can captivate their attention for a long time.

A lot of them were filled with the spirit, understood healing, learned how to pray, understood the trinity, salvation, and everything else the God centres teach on.